This week we make a foray into the world of fortified wines – the ones that have their alcohol content increased from their natural 12%, to a whopping 22%, or more.  The first of these wines we’ll be discussing is the most underrated of all of them – Sherry.

For a small primer on where fortified wines fit in, you can read this article: Wine 101 – Types of Wine.

Sherry is generally associated with the English, but the true origin of the wine in actually Spain. 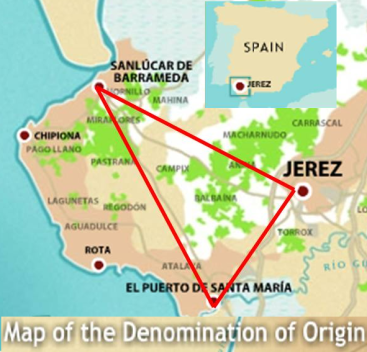 The English just took a great fascination with it, and began drinking it with great gusto and enthusiasm. And through them (and their extensive trade route), it came to the rest of the world.

In fact, Sherry wasn’t normally drunk fortified in Spain. But the English, who needed to ship it over long voyages, found that the wine lasted much longer on the journey when the alcohol strength was increased.  People eventually came to prefer the style, and the rest is history.

The wine was originally called “Jerez” – named after one of the regions where it is produced. It can be pronounced in a lot of ways (Hireth, Yerez, even ghir-ez), but leave it to the English – they have to make it simpler for themselves. Over time, the name got anglicised to Sherry, and that’s what it’s known as today.

Unfortunately, India hasn’t yet warmed up to the recent Sherry craze that’s hitting the world. It’s hard to find Sherry here, even at the Duty Free, and the ones we do get are often badly stored. So at that point, it’s basically a corpse on a shelf.

But what exactly is it?

Sherry is a white wine, aged for a minimum of three years. It’s made primarily from three grapes – Palomino, Moscatel, and a grape mysteriously known as “PX”.

It is said that the man who popularised the grape was called Peter Siemens, who later became known as Pedro Ximinez in the local language.  This remains unconfirmed, but like many legends, it all depends on what you choose to believe.

There is no shortage of ways to make Sherry. Most Sherry is dry, and drunk as an aperitif, but there are some sweet styles as well.

The most well-known style, called oloroso (which means “fragrant”), involves fermenting the wine till dry (to around 12% alcohol) and fortifying it by adding “destillado”, a distilled wine of about 75% alcohol by volume.  They add just enough to bring it up to an overall 18% alcohol – but they can always take it higher if they like.

But now, we come to some of the science-y stuff. Sherry is barrel aged, and there’s one unique thing about it. In ways that people don’t fully understand, Sherry manages to invite another kind of yeast onto itself – a game changer called “flor”.

It’s an extremely delicate, finicky customer, that is capable of transforming the taste of an ordinary oloroso into something amazing.  The Sherry made with the flor yeast is called “Fino”, or “fine”.

Oloroso sherry is generally quite dark, but Fino manages to retain a paler colour because of the yeast. It also helps to convert even more sugar into alcohol, causing it to be much drier than an Oloroso.

But with anything that amazing, there’s always a catch. Flor is an aerobic yeast – which means it needs oxygen to survive. And as we know, oxygen and wine are not good friends. It does play a role in the aging of this wine, but as a general rule, you want to keep the two apart.

So it’s always a risk that the winemaker has to take. Part of the harvest is kept aside in barrels that have an air gap left intentionally, in order to encourage the flor yeast to settle on the wine.

It forms as a thin film on top of the wine, which prevents the oxygen from affecting it. But since it’s so sensitive, the slightest change in the surroundings can kill the yeast, and cause the wine to oxidise.

This also means that “intended” Fino sherry is only fortified to a little higher than 15% abv – and not to 18% right off the bat. No yeast can survive an alcohol content of higher than that (15.5%, to be exact), so Fino’s are encouraged to get the flor treatment, and fortified again later, once the work is done.

If the Oloroso doesn’t show promise to become a Fino, and the flor doesn’t form, it’s quickly topped up to close the air gap, and fortified to the intended strength.

The most radical thing about Sherry lies in one of those genius techniques, that make you sit back and wonder, “who even manages to come up with stuff?”

It’s a cleverly devised process that simultaneously blends and ages the wine, known as the Solera system. It’s also known as “fractional blending”.

Imagine a huge stack of barrels, horizontally piled one on top of the other.  The Sherry to be bottled and sold that year lies in the bottom layer, known as the Solera. This layer contains the wine aged the longest. The successive layers above it are known as “criadera”.

It’s time to play a little numbers game. Please bear with me.

Let’s assume that there are five barrels on the lowest layer, each containing about 600L of wine.

The system requires that you keep a “minimum balance” of about 200L in each barrel. So instead of emptying even one barrel, you take an equal amount of wine from each of the five (400L each), while maintaining the minimum balance. So by the end of it, you have 200L left in each barrel, and enough wine to sell.

So how do you fill these barrels again?

Remember that the barrels are stacked in layers – so the deficit in the lowest layer of barrels (the Solera) is topped up from the wine in the barrels one layer above it – the criadera. But this leaves a deficit in that criadera level – which is then topped up with the wine from the next layer, and so on.

This keeps going on until you hit the top layer of barrels. Now you’re stuck, because there’s no higher level to take the wine from.

But as I mentioned – the lowest level contains the oldest wine. The highest level, therefore, contains the “newest” wine, or the wine from the most recent harvest.

So you can see how the new wine travels down the layers from the highest level, down the criadera and finally to the Solera layer – constantly being mixed with the older batches of wine. This is where the “blending” part of the system comes in.

As for the aging? Coincidentally, it takes about three years for the wine to progress from the top layer to the Solera – which just happens to be the minimum aging requirement by law.

And there’s Sherry for you. I’ve never tried one myself, because of the limited availability here, but I will definitely update this post the moment I do.

I will quickly go over the different styles – many are just derivatives of themselves. 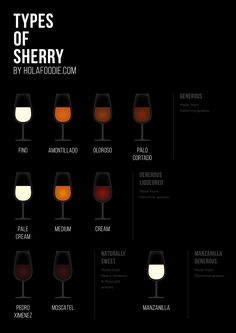 1) Oloroso – The most basic form of sherry, aged for about three years. Has a darker colour, as compared to fino.

4) Amontillado – A fino aged for about 6-8 years. Darker than a fino sherry, with a distinctive nutty taste.

6) Manzanilla (pronounced man-tan-ee-aa) – Fino produced exclusively in the town of Sanlucar in Spain. Said to have a salty / bitter aftertaste, due to the sea breeze.

8) Palo Cortado – A sherry that starts as a fino, but loses its flor yeast, maturing as an oloroso.

Thank you for reading! As always, if you have any questions or confusion, please leave a comment below, or contact us via email, on on Facebook. 🙂

See you next week!