Wine has remained more or less constant for thousands of years. There was once a time when bubbly wine was considered the peak of technology in winemaking.  No doubt technology has advanced rapidly in these hundreds of years, but the wine itself has never had to evolve – it being perfectly enjoyable the way it is.

Unfortunately, its own history works against it, as there is a lot of external information that one must contend with, concerning geography, wine regions, wine laws, grape varietals, and other such matters.

The lack of anything “new” in this regard creates sort of rift, between those who know all about these factors (so called wine snobs), and those who do not. Yuvraj and I lie somewhere between the two, although we promise never to become snobs – enthusiasts is a more apt word.

Enter the brainchild of six young Spanish entrepreneurs – Blue Wine. They have created quite a stir in the industry by a product with such controversy, and it doesn’t stop there.

Their website confidently states, “We do not believe in wine tasting rules and we don’t think that anybody should need to study the bible of oenology to enjoy a glass of wine.” This in itself sounds pretty cool, but here’s the controversial part.

Apart from the fact that the wine is blue (much of the criticism associates it with mouthwash and glass cleaner), the six Spaniards behind it actually have no wine education at all. They grew up in a country where wine is put on a pedestal, but felt like there wasn’t much of a connect between the producers and customers.

They say, “We thought about how it would be to have real people making wine for real people, not a wine made by experts to pseudo-connoisseurs.” Bold move.

The company, Gik, has worked with the University of the Basque Country and Azti Tecnecalia (a food research centre) to create and perfect their product. A major selling point of the wine is that it uses natural pigments from the grapes, as well as natural indigo dye – along with “non-calorific sweeteners”.

So what does this wine taste like? Supposedly, it tastes like a sweet white wine, possibly similar to Riesling.  If this is true, it might be something that appeals to the Indian market to a large degree.

Not only does it come without the strings of needing a  wine education, but it also suits our palates, in terms of sweetness – and it’s pretty cheap as well. It retails for approximately  €10 / $11, about  Rs. 750 – incidentally, the same price as Sula’s Riesling. It will clock in at about 11.5% alcohol by volume. 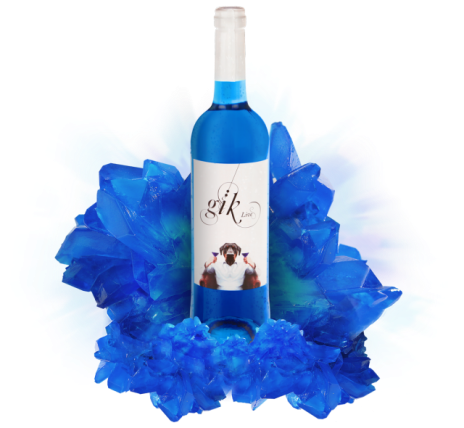 Exact details have been intentionally been kept hazy, I believe. The grape varietals that go into the wine have not been disclosed, but the company uses both red and white grapes from vineyards in La Rioja, Zaragoza, Leon and Castilla-La Mancha.

So why blue, of all colours? While it still remains a strong no-go in the food sector, there are several beverages that have managed to turn blue in their favour. Not all of them are alcoholic – Gatorade for example, has had tremendous success with their Blue Bolt flavour. Blue Curacao is another famous example.

However, the company has other, non-profit oriented reasons. Primarily, they wanted to shake up the existing stereotypes in the wine industry, and create something out of the box and revolutionary. Check.

Secondary – blue holds special significance to the six entrepreneurs, who were influenced by the book “Blue Ocean Strategy”, by W. Chan Kim, incorporating “movement, innovation, fluidity, change, and infinity” into their business models. So far so good.

The whole company seems to have modelled itself to target the younger audiences – like themselves – those who have not grown up with the set-in-stone wine traditions and educations. Their label seems to embody this also. I don’t think I have to say much about it, it’s pretty much self-explanatory… Nothing strange there.

As for food pairings, this wine might suit us more than we previously imagined.  It’s said to go well with sushi, nachos, guacamole, pasta carbonara, and smoked salmon.  Definitely worth a try.

It might yet be a while before this wine is available in India, but for those of you headed to Spain, Germany, the Netherlands, the UK, or (soon), the US, this is where Gik is currently distributing. It may be a nightmare to a wine purist, but I’m quite excited to try it myself.

This is the first post we’ve done at the request of the community – that’s all you guys. We’d love to know your thoughts about what you’ve read so far. Leave a comment below, send us a message on Facebook here, or leave your feedback here.

See you all next week – happy drinking!